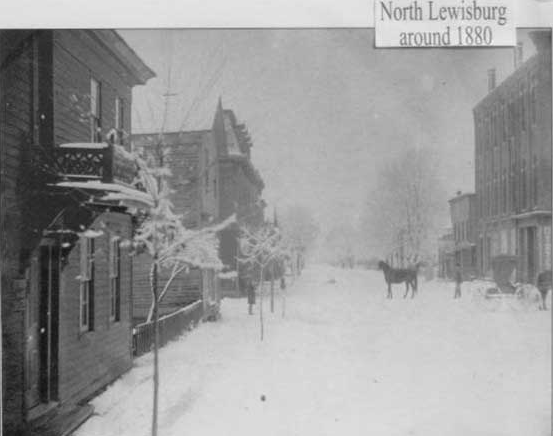 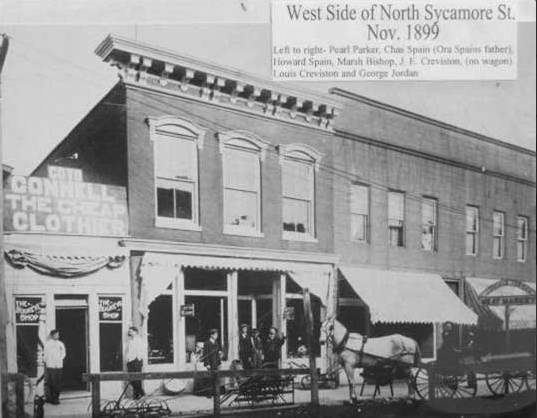 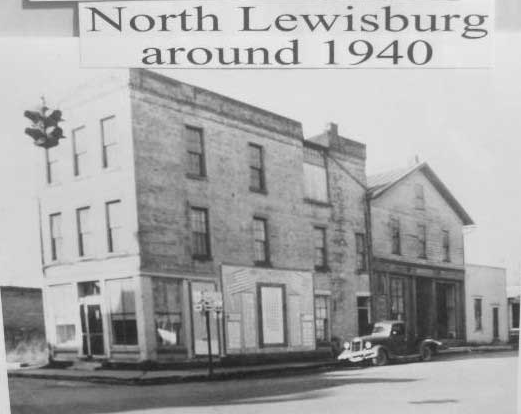 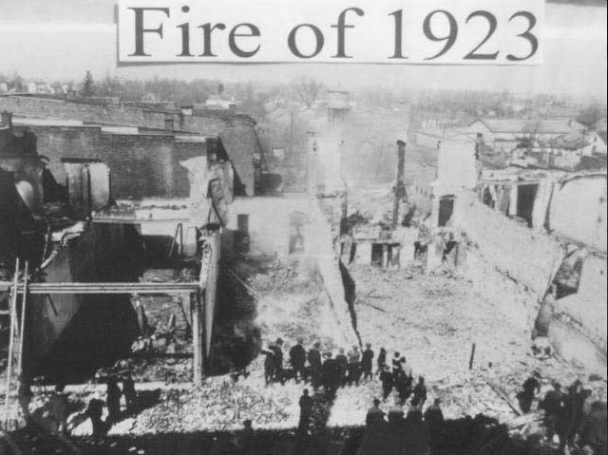 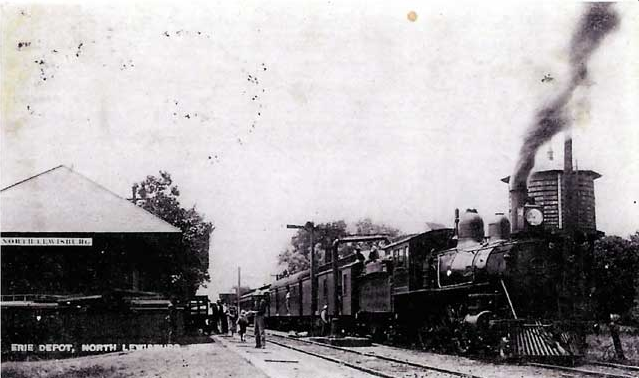 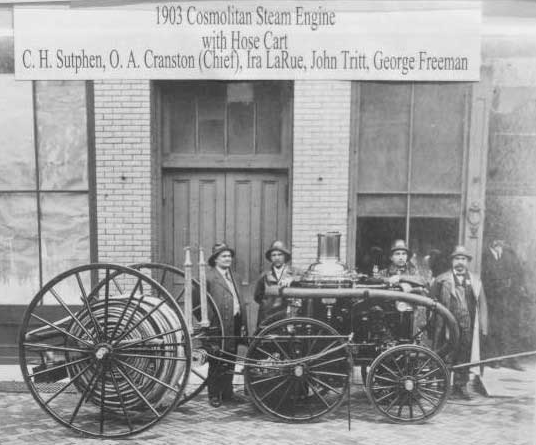 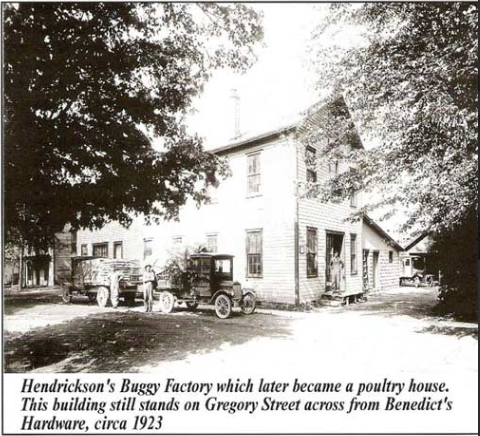 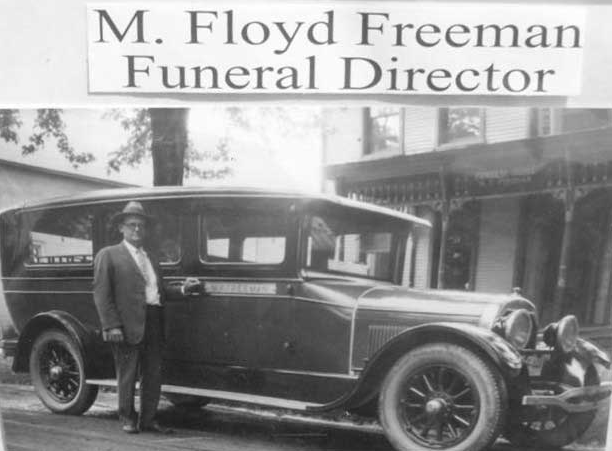 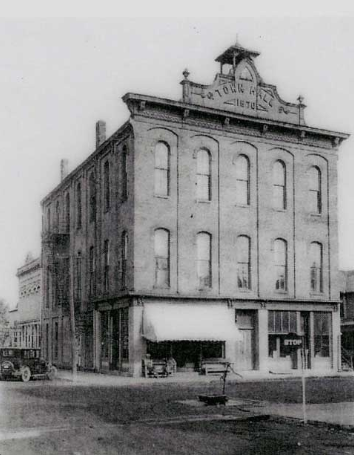 We hope you enjoy this wonderful compilation of North Lewisburg history pictures, courtesy of Max and Janice Coates. Click on the photos to view a larger version.
Preface
The trip our forefathers made to this community one hundred seventy-five years ago is the idea behind this book. The courage and sacrifices of these men who have gone before, have been instrumental in the development of North Lewisburg,. From a wilderness and barren land we have come to be a community of prosperity and civilization, with a host of varied interests.

We have relied upon the Old Lewisburg Village Minute Books,- Middleton's History of Champaign County, 1917; Beds History of Champaign County 1881; old clippings from Goldie Millice's scrapbook; Reba Wilson's scrapbook, and accounts of events told by residents who can remember them. Thanks to all the many people. We are indebted for all their interesting information and valuable pictures which we have compiled, and now present to our readers. Please excuse any discrepancies or omissions as no offense was intended.

We sincerely hope you find pleasure in reading about North Lewisburg, it's past through the present, and that this book will be an added reference to your library.

Life on the Frontier
First came the hunter, the real pioneer who opened the trails and built rough shelters. When he sold enough pelts, he bought a horse or cow. This first-comer survived because of his ability to use an axe or his rifle. The hunter depended on his keen eye as a marksman to keep himself supplied in food.

Second came the farmer who lived from hand to mouth. He planted a few fruit trees and grew grain such as rye, wheat and corn (which was mostly used to make whiskey) on land he had cleared. While he improved upon his cabin, he was less concerned with his livestock and they were prey to wild animals.

The hunter and the first farmers were replaced by a farmer who brought with him enough money to improve his farmland. The construction of a good barn preceded the building of a better home. The early settlers became accustomed to the crude life of a frontiersman, and the native Indians frequently camped on their farms near Spain's Creek. Wild game could be shot from the door steps of these settlers.

The First Permanent Settlers
According to Middleton's Champaign County History, the Spain family has been credited as probably the first permanent settlers, in this area. Hezekiah Spain, coming from Dinwiddie County, Virginia, came to this area in1805, the year the county was organized. There were approximately nine other families from Dinwiddie County who located here. They were: J.P. Spain, Stephen Spain, Jordan (or Gordon) Reames, Hubbard Crowder, William Spain, Daniel Spain, John P. Spain, Jr., Thomas Spain and John Crowder. Hezekiah Spain bought the entire survey No. 4666, original patent holder, of one thousand sixty-three acres recorded on Feb. 6, 1806, for which he paid $2.00 per acre. The later group of settlers came from the New England states.
Pioneer Life
In the year 1805, there were ninety-one emigrants in all who came to settle one mile west of North Lewisburg, According to an account written by Willis Spain, who was Hezekiah Spain's son, made the move from Virginia to Ohio when we was nine years old. He writes, "Onward we came over hill and dale, over mountains and rivers, seven long weeks. Every night where we could find water we pitched our tents for night, built fires, got supper, fed the horses, and went to bed. In the morning, got breakfast, geared up and moved forward until noon, built fires, got dinner, fed the horses, hitched up, forward moved till night again. And soon from day to day until we passed rivers and mountains, where we would have to double teams to climb the mountains and the Allegheny and Yellow Hills and many dangers in the way, until we drove into an unbroken forest and pitched our tents. No house within four miles, no mill, no store short of twenty-eight miles; winter close at hand, no hay, no corn, and no fodder."

​"Our neighbors were the Mingoes and Shawnees and Pianoes, the wolves and the panther. We began to build cabins to prepare for winter; round logs for the body; split logs for the floor; clapboards and poles for the roof."

"By rambling through the woods eight or ten miles, we found corn, but no meal. We would boil corn and make hominy, then we had meat to eat with our bread and hominy. Sometimes a fat opossum and fat turkey, We would feast fine, indeed."

"Through the winter we cut down small timber to clear for corn in the spring. By June we had ten acres ready for the plow. By the fifteenth of June we had it all planted. It did well but the squirrels and birds wanted a large share of the crop, and the mosquitoes seemed to think we had trespassed on their rights and fought bravely, but we kept the field and raised a good crop of corn. The horses had plenty of graze in the woods. As soon as the corn would do to grind, we shelled a load and started to Springfield to mill, and it took a week to get it home. With hominy it would last through the winter; so with our efforts we made farmers and killed game."

Early Militia (1805)
The early activities of militia started with an act of Congress in 1792 for all able bodied citizens between the ages of 18-45, to enroll in a militia company. Also, they should arm themselves and appear for regular drill and annual musters. These were the days when the Indians were everywhere west of the Alleghenies.

The settlers built blockhouses for their protection. There were at least a half dozen blockhouse erected at various sites in Champaign County prior to the War of 1812. One of these was built one mile west of North Lewisburg on the present site of the new part of Maple Grove Cemetery. It was built on the highest point of land. As far as is known, there was not a white man killed by an Indian within the boundary limits of Champaign County.

Johnny Appleseed
It has been noted that Jonathan Chapman, better known as "Johnny Apples eed", stopped at the Black farm on Burton Road and planted apple seedlings as he was traveling from the east toward Indiana. He has the honor of doing a great deal of pioneer work in fruit propagation. "Appleseed" wandered up and down Ohio and northern Indiana, always walking, always with a bag of apple seeds on his back, always giving them away.

The early settlers brought fruit trees with them when they made their journey to this area. The orchard products were found in most every household. The housewife dried apples, blackberries, raspberries, pumpkin and corn. Cherries, peaches, pears and plums were used for canning jellies and jams, while quinces were used for butter. In the late 1800's the largest orchard of Champaign County belonged to Abner Winder located at the edge of North Lewisburg.

Platting of the Village
One hundred seventy-five years have passed, (the following was written by M.C. Gowey) "and are engulfed in the unyielding past since the first descent was made and a settlement effected in what is now known as Rush Township. The works of nature in this locality were undisturbed, yet slumbered in that awful stillness which characterizes nature's tranquil sleep, awakened only by the howl of the wolf, the screech of the panther, the rapid flight of the timid deer, or the whoop of the red man to break the enchanted stillness that reigned supreme in nature's wild dominion."

"Years, in their rapid flight, had chased each other around the dial of time until centuries had been denoted on it's face; yet the monarch of the forest-sentinels of ages-marked nor change. Suddenly, as if by magic, the white man appears on the scene and is destined to become a prominent actor in the great drama which is to be enacted."

Of these sturdy pioneers was a man named Gray Gary who on September 6, 1826 platted the site of North Lewisburg on a high point of land on Spain's Creek near the big spring. The land is situated in the northern part of Rush Township and near the Logan and Union County lines. It is on Spain's Creek, in a level, fertile and populous part of the County.

Gray Gary bought one hundred fifty acres from Hezekiah Spain in 1810 west of town. In 1814 he sold a part of this and later purchased the tract where North Lewisburg is now located. Mr. Gary bought it with the idea it was an ideal location for a home near the big spring, and a likely place for a thriving town. Gray Gary's first home was a log house near the springs. His family consisted of his wife Sovica and seven children. Thirteen years after he platted the town, he built the first frame house in town, now owned by Mike Chamberlain, located on the east side of Sycamore Street, the last house next to the railroad. In 1826, after platting the village, Gary sold at auction the first lot at a sum of $18.00. It was the northeast corner lot of the downtown square. Gary died in 1839.

Our village will celebrate its 175th anniversary in September, 2001. We have noted the many changes in our community since we celebrated our sesquicentennial in 1976.

Incorporation
Many of the leading citizens felt that the village should be incorporated and this action was completed by act of Legislature in 1844.
The minutes of the council meeting were written in the quaint Quaker language. The days of the week and the months were designated according to the Quaker custom, not as we do today. The following are the first minutes recorded at that first meeting:
Pursuant to previous agreement the Town Council met first time 7th mo. (July) 24th, 1844. Present all the members except Caleb F. Bowron. The following Ordinance for the graveling of the side-walks and streets was proposed.

Be it ordained by the Town Council of the Town of Lewisburg; That the sidewalks, and streets, throughout the corporation be graveled (where it has not already been done) the side walks to be six feet wide; and six inches deep in gravel; the gravel on the streets to be ten feet wide and six inches deep to be placed in the center.

Each freeholder shall gravel the walk bordering on his own property, within sixty days from the date hereof.

And to complete the graveling of the streets, each freeholder, shall bear their equal proportion to accomplish the same, under the direction of William Milligan and Joseph F. Gary, who are appointed to superintend the whole of the work on the streets and side-walks; and report to the first meeting of the Council after the sixty days expire.

On motion it was decreed that the Marshall and Treasurer be appointed by the council for the time being, and elected by a plurality of the voters at the annual elections of the Corporation hereafter. On motion the Council adjourned to 1 o'clock p.m.

And be it further ordained that any person carrying on business that makes it necessary for his customers to hitch horses, shall put up the necessary accommodations for that purpose; or forfeit the expense of building said accommodations.

And be it further ordained that it shall be the duty of the Marshall, to cause to be removed all nuisances in the corporation, or obstructions on the streets be at the expense of the offender.

The Council adjourned to meet again this day in 4 weeks at 4 o'clock p.m. John Winder, Recorder, R. B. Spain, Mayor.

North Lewisburg participated in the Corporate Limit Marker Program in anticipation of the State of Ohio's 200th birthday in 2003. The village applied for and received 4 signs on April 26, 2001. They are Ohio shaped cast aluminum capturing our community's significance in a brief phrase.